You are here > Meet the Board > Jacki O'Shea 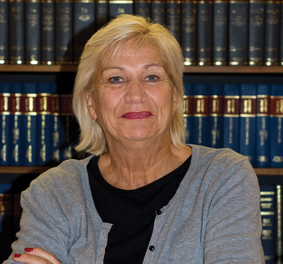 Responsibilities:
To enable and support the Trust to work efficiently to provide housing and care for the elderly and vulnerable

About Jacki:
Born in Guildford in November 1951, the second of six children. Family moved to Bournemouth in 1960, attended the Convent of the Cross School followed by Bournemouth College for a Secretarial and Business Course. Jacki has two children who live and work in London.

Career History:
Jacki worked in two of Bournemouth’s Language schools in the Admin Departments, took a career break to train as a Pub Manager with Whitbread.  Moved back into admin with a French Company in Poole in 2000 and was their the HR Manager until she retired in 2017.

Hobbies & Interests:
Work and family don’t leave too much time for hobbies but Jacki loves to watch Bournemouth or Southampton Football games. Her favourite team is Barcelona due to many visits there to see family. Jacki loves travelling but also has a beach hut at Southbourne as she loves the beach – if only the weather was better!!

Jacki says:
East Boro Housing trust is close to my heart as my Father, Ray Faulkner, was involved from the beginning. We all grew up with it in our lives. It is a fantastic organisation where all the Board members and especially staff care about the elderly and vulnerable in our community.