You are here > About Us > Case Studies > Keith Inch 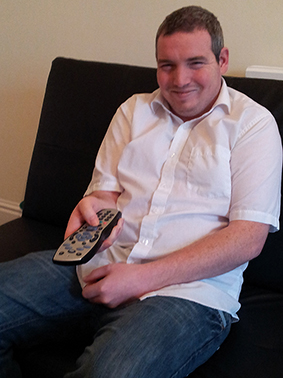 BACK in September, Keith Inch had a dream.

It may have seemed trivial to some, but to the 26-year-old East Boro tenant, it meant the world.

“I wanted Sky television in my flat”, explained Keith, who lives in Weymouth. “But I honestly never thought I’d ever achieve it.”

His reason for being so negative was, by his own admission, an inability to organise his finances.

He explained: “I was terrible. As soon as I got my money each week I would spend it on everything and nothing. Junk food, magazines, clothes I didn’t need, computer games – you name it, I bought it.

“I had always wanted to get Sky with a broadband facility but there was no way I would ever be able to afford the monthly payments. It used to make me so frustrated but I just kind of accepted that I’d never be able to manage my cash.”

After sitting down with his East Boro support worker, Keith decided to give saving and budgeting one last try.

“I used to control my own spending but with my support worker’s help I decided to start budgeting and trying to save”, explained Keith. “What I did was start using the safe in my room where I would put my cash and bank card and only have access to them with support.

“It was really hard at first. We would budget a week in advance and if I spent all my money in one go then that was it – I could have no more. Of course I could have had more if I’d really wanted but I worked really hard and remained committed and slowly it began to get easier.”

Having saved hard for three months, Keith’s dream eventually came true towards the end of November.

“We reviewed things close to three months in”, he added, “and to my amazement I had built up a fair amount in savings and was coping fine on my weekly budget. I was in a position to have Sky TV so I went and got it ordered.

“I am so happy because I thought the day would never come. So it’s a huge thanks to East Boro and their support staff – I couldn’t have done it without you.

“My advice to anyone who needs help is to go ahead and ask for it. It’s hard work and you have to be committed but the results make it well worth while.

“Sorting my finances has changed my life for the better and I have never been happier.”